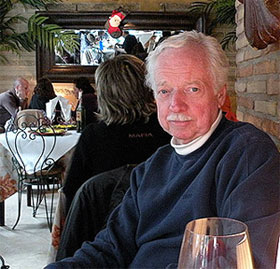 Paul Salmon, an award winning illustrator, has worked with such distinguished clients as the Smithsonian, NBC Television, National Geographic Society, Time-Life Books, NASA, U.S. Postal Service, American Forces Press and Information Service and numerous government agencies. He has received commissions from the Smithsonian Air & Space Museum, and New York stock exchange companies’ annual reports and national publications. He has a Bachelor of Fine Arts Degree from the Richmond Professional Institute, College of William and Mary, and has taught at the Corcoran School of Art. He has exhibited with and is a recipient of numerous awards from the Washington Art Directors Club, the Society of Illustrators in New York, the Meade Library of Ideas and the Printing Industries of America. He exhibited 3 paintings with the Smithsonian’s traveling exhibition entitled “The Artist and the Space Shuttle.” His work is part of the permanent collection at the Kennedy Space Center. He has been commissioned by the U.S. Postal Service to design and illustrate two U.S. postage stamps entitled “Supersonic Flight 1947” and the fifty five cents stamp “Billy Mitchell.” In addition to his corporate assignments he devotes time to golf, travel, and painting. Paul lives with his wife Pamela in Burke, Virginia